Rebuilding Together serves communities across the country facing a lack of safe, affordable and accessible housing.

Building a Healthy Neighborhood (BaHN) exemplifies the efforts central to the mission of Rebuilding Together, helping to solve the urgent need for safe homes and communities for everyone. Recognizing that unsafe or unhealthy living conditions at home account for many of the leading causes of preventable fatality, illness and disability, today – this annual effort demonstrates the positive effects of home and neighborhood revitalization on the overall health of homeowners, families and communities, and has given back nearly $2.5 million in market value nationwide to-date.

On October 24-25, 2019, Building a Healthy Neighborhood will bring together hundreds of volunteers and community members to demonstrate the positive effects of home and neighborhood revitalization on the overall health of homeowners, families, and communities.

Through home repairs and community engagement, Building a Healthy Neighborhood supports homeownership and community preservation for some of the remaining families with historic ties to the Central District. Home is more than just a place to live, though.  Home is the neighborhood around you – the people, the landmarks, the businesses, the public facilities – home is about community.  Building a Healthy Neighborhood will celebrate and strengthen the Central District community, because we believe everyone deserves a safe home and community.

Our Partners
We are grateful for Lowe’s and other corporate citizens in supporting our mission to rebuild lives in Seattle this fall. 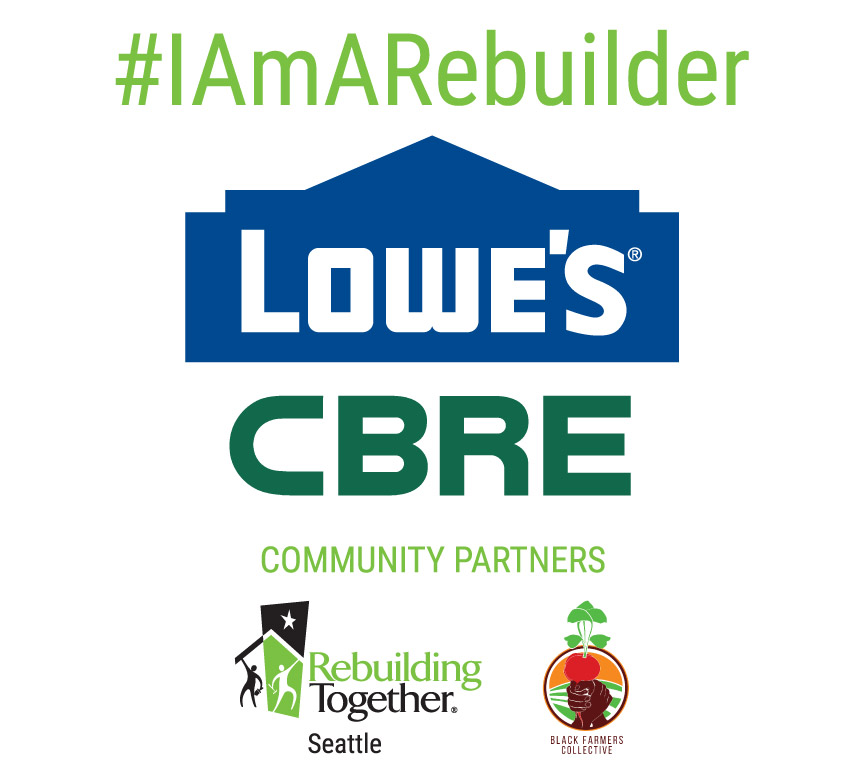 Over the past 12 years, Rebuilding Together New Orleans has provided safe and healthy housing to more than 600 homeowners and their work continues to grow as community need increases. Through critical home repair and investment in the St. Roch neighborhood, where they have become a staple, Rebuilding Together New Orleans will host Building a Healthy Neighborhood bringing the community together to revitalize the area and impact lives for the better.

St. Roch is a historic New Orleans neighborhood nestled between the famous Marigny, Bywater and 7th Ward neighborhoods.  With more than 65% of the residents in this community considered low-income earning less than $15,000 a year; 16% of the neighbors are 65 years or older. St. Roch is a prime neighborhood for reinvestment targeting older adults. Many homeowners have lived in the community for generations and most have experienced the destruction Hurricane Katrina brought to their neighborhood. After millions of dollars and thousands of hours invested in restoring St. Roch, there is more to be done. Homeowners are now at-risk of displacement due to increasing property values coupled with limited resources to improve their family homes. Building a Healthy Neighborhood will provide critical home repairs, free of charge, to eight homes while investing in the community through the creation of a tool lending library, which provides residents with access to free tools and equipment.

Our Partners
We are grateful for Lowe’s and other corporate citizens in supporting our mission to rebuild lives in St. Roch New Orleans this fall. 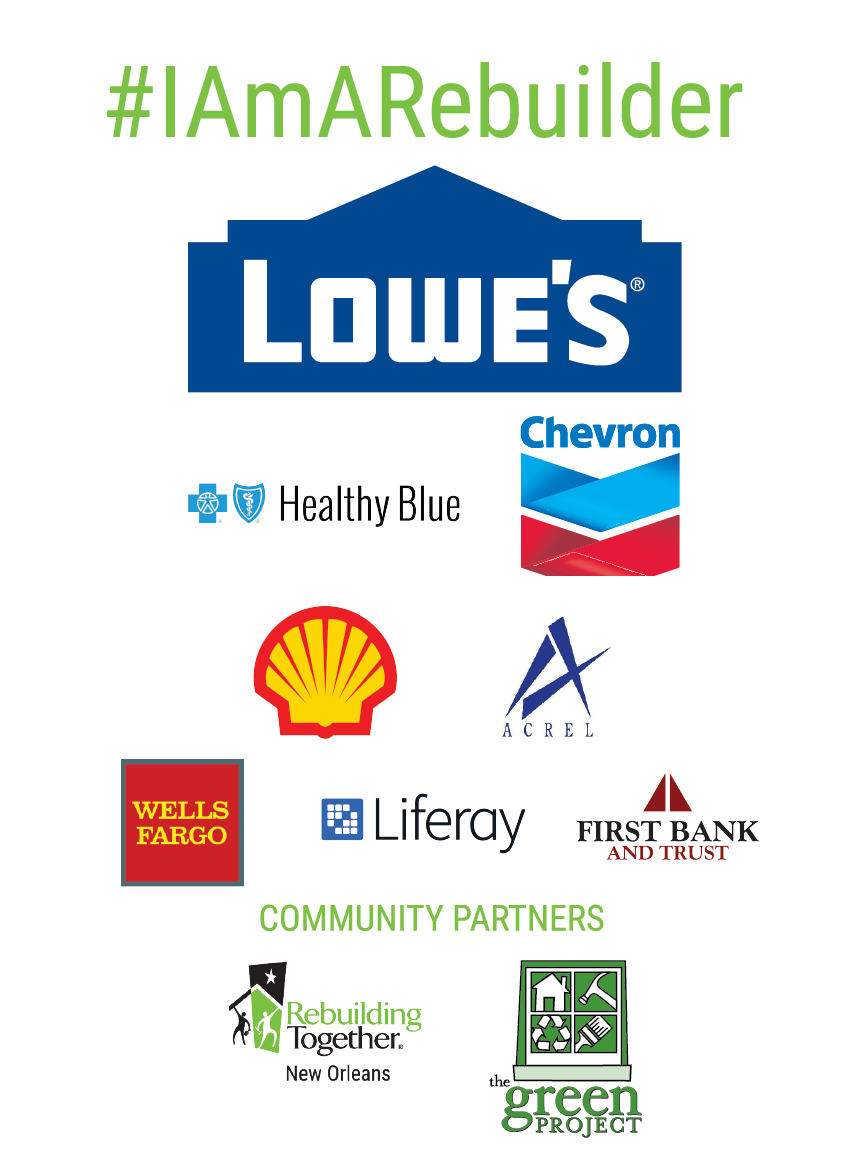 Located in northeast Baltimore, the Govans/York Road Corridor area contains numerous historic neighborhoods. York Road is widely seen as a historic dividing line of race and class. Wilson Park/Northern in Govans wass the focus for the project in 2017. The Wilson Park/Northern Association was formed in 1982 as a result of the merger between the Wilson Park and Northern neighborhoods. Wilson Park is named for Harry Wilson, who began developing the community by building houses in 1917 and was one of the city’s first black bankers offering mortgages to Wilson Park homebuyers.

Many of the homes still feature the original wood frame houses designed by Mr. Wilson. The Northern neighborhood was home to working and middle class second generation Americans and as the times evolved, African Americans. Hailing from the neighborhood are such notable residents as civil rights lawyer Charles Ewbank Tucker Dearing and Lloyd Bowers, a former Baltimore City School Board Commissioner. At its height, Govans was a shopping hub that attracted thousands of customers throughout Baltimore and the surrounding metropolitan area. The 2008 financial crisis had a strong economic impact on many Govans residents, forcing them into foreclosure.

In May of 2015, a comprehensive plan for the York Road commercial corridor was passed through the Baltimore City Department of Planning. Rebuilding Together’s work in the Govans area will complement the recommendations made through the comprehensive plan to transform this area into a vibrant, revitalized community. 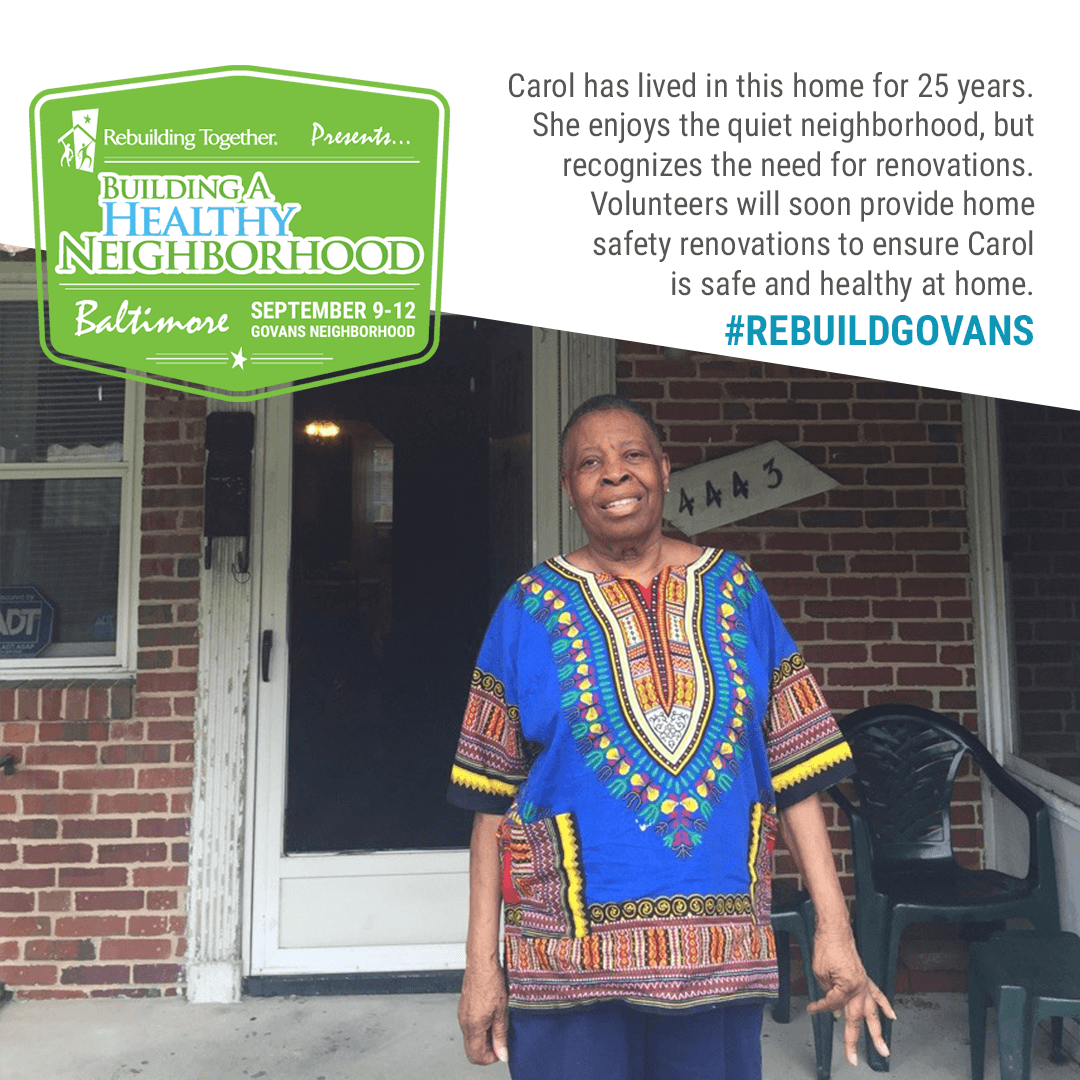 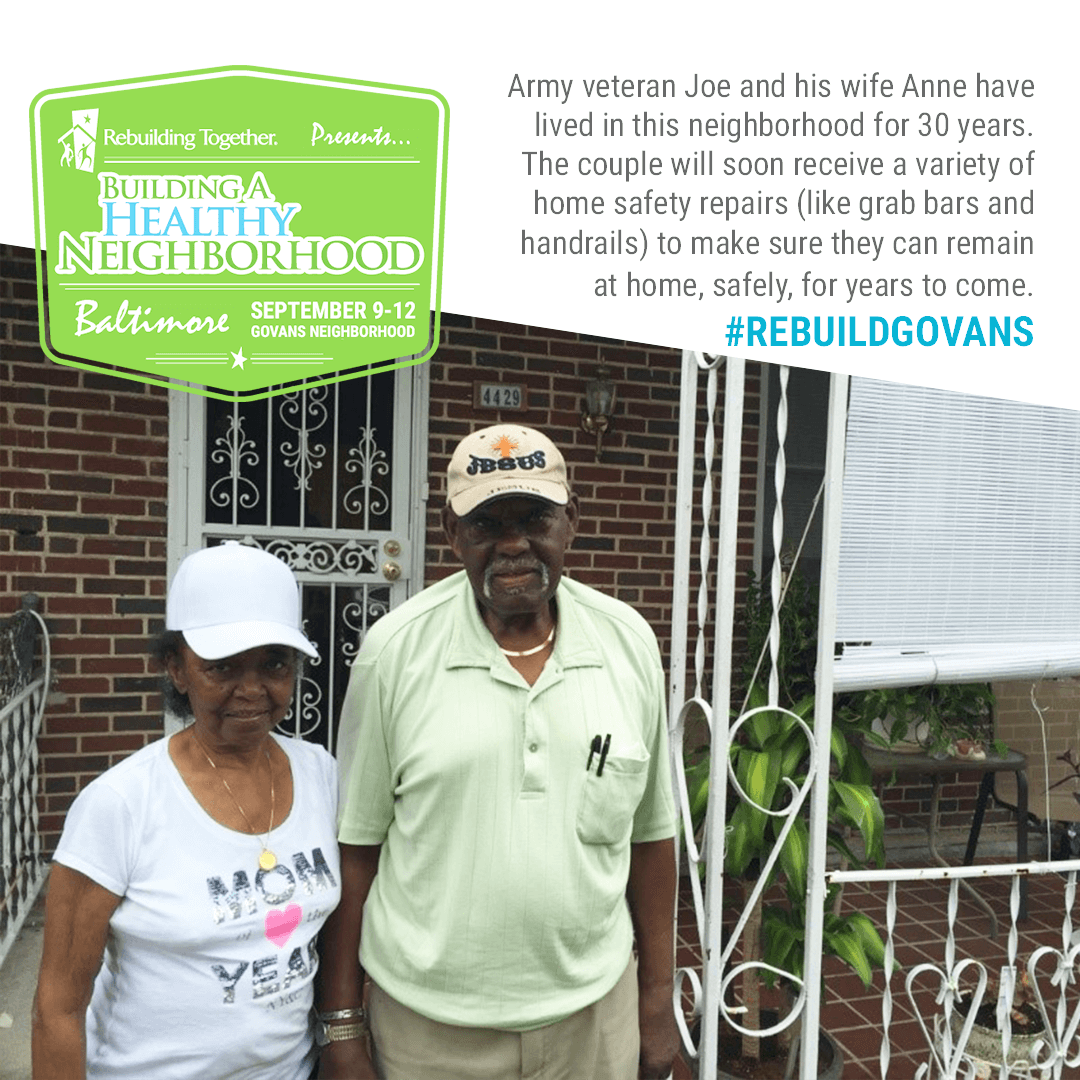 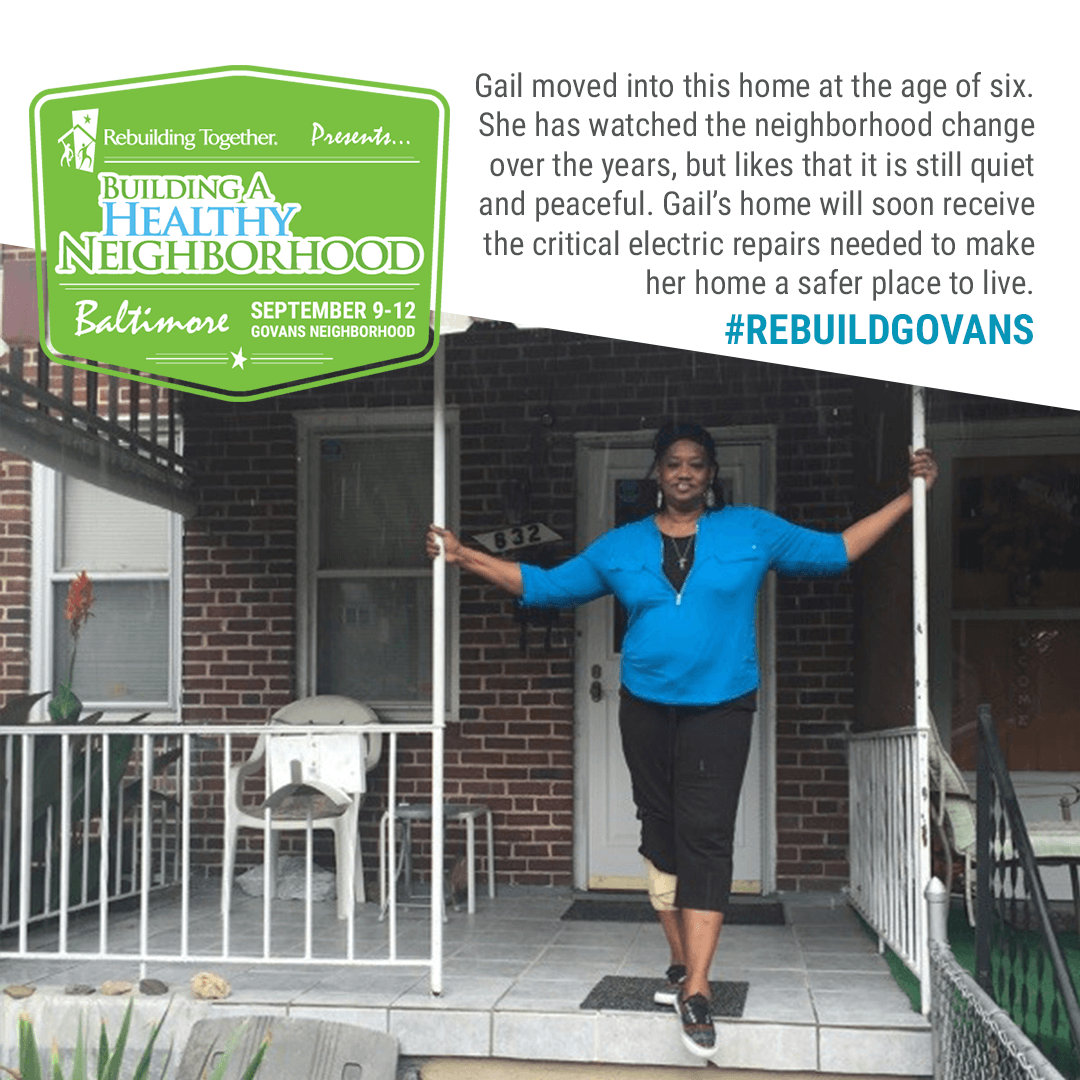 Our project in Baltimore would not have been possible without our partners CBRE, Lowe's and Wells Fargo. Their commitment to serving our neighbors in need has transformed thousands of homeowners and community members across the country. 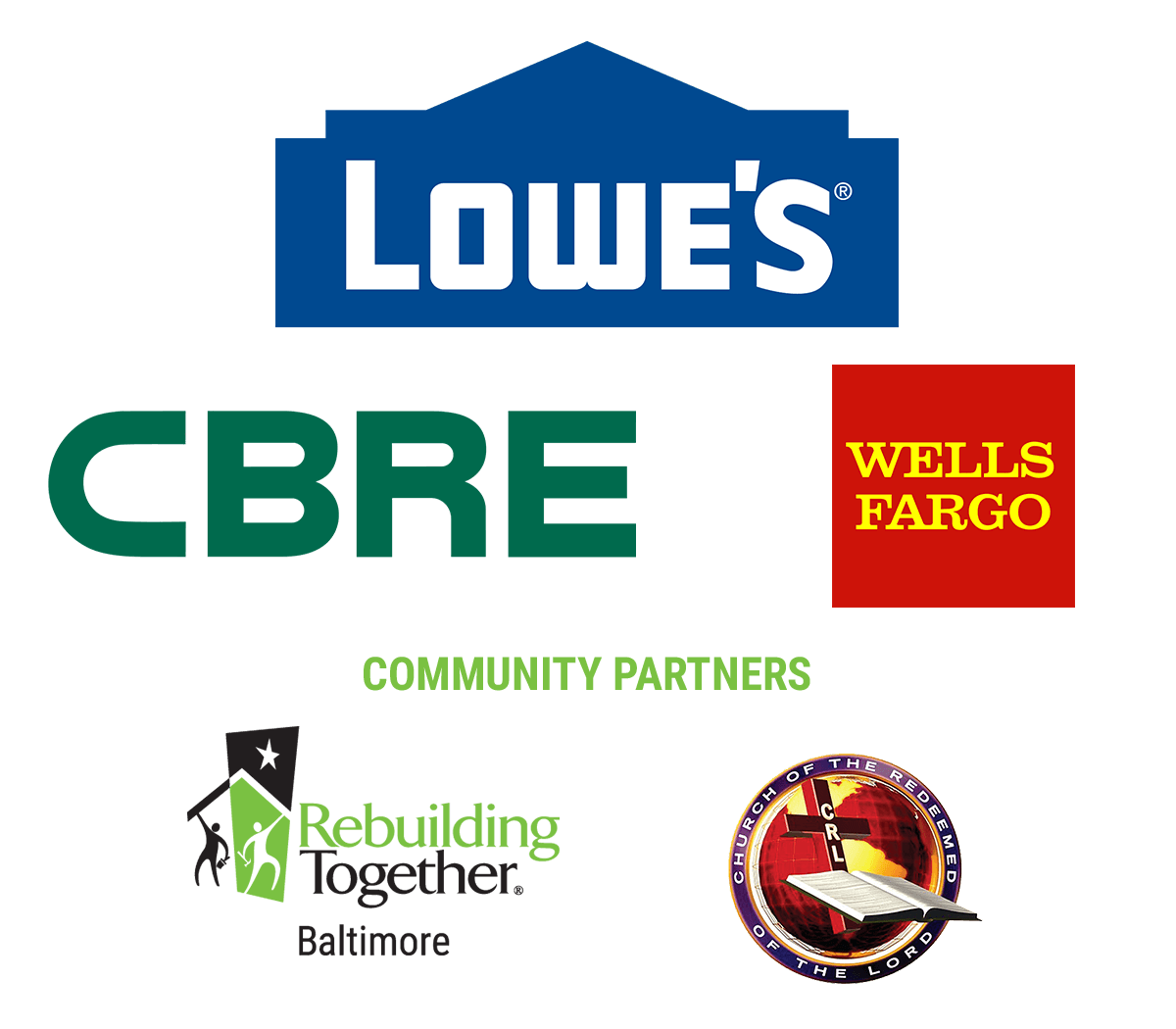 On September 23 and 24, Rebuilding Together brought together volunteers in Cleveland, to help revitalize Northeast Ohio. We worked in the Slavic Village neighborhood, creating real change for the homeowners and residents of that community.

Volunteers provided critical home repair, energy efficiency updates, and numerous health and safety modifications to 10 neighborhood homes. Volunteers also rejuvenated "The Haven" – a community space serving residents of Slavic Village – and cleaned up the neighboring homes, impacting the entire neighborhood. Rebuilding Together offered health related training and screenings to the entire community, transforming the health and safety of the residents.

Rebuilding Together also hosted a Community Celebration & Resource Fair, which provided educational information on safe and healthy housing to help create a lasting transformation for the residents of Slavic Village. Additionally, we hosted a town hall for all community members and residents, where they could ask questions of community leaders and organizers working to transform Slavic Village.

Our efforts in Northeast Ohio would not have been possible without our partners: CBRE, Lowe's, Charter Communications and the Roofing Industry Alliance for Progress. Their dedication to transforming lives and communities has helped - and continues to help - thousands of homeowners and community members across the country. 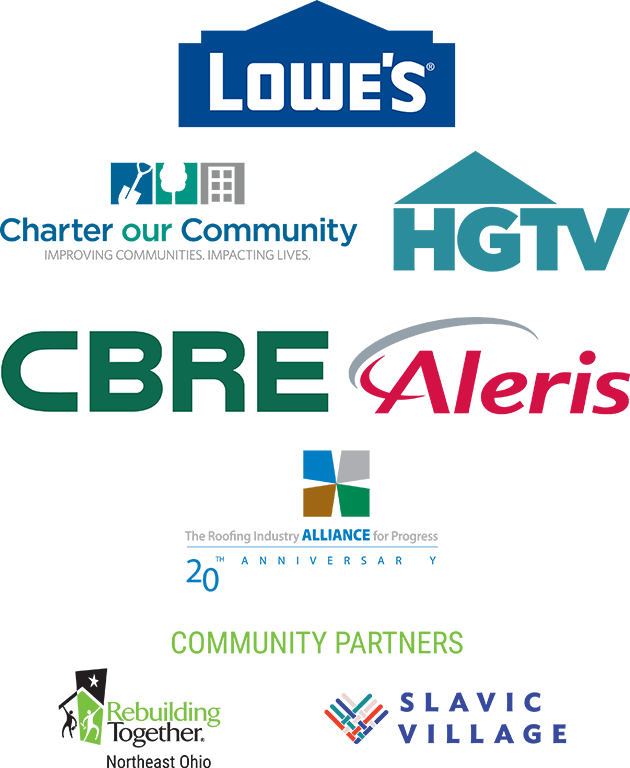 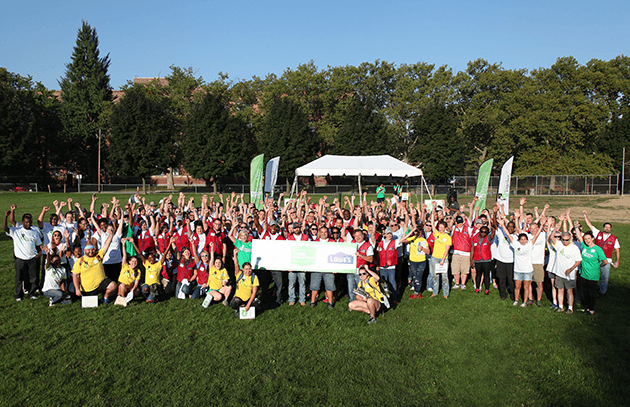 Our volunteers and partners are ready to work on Day 1 of Building a Healthy Neighborhood in Cleveland. 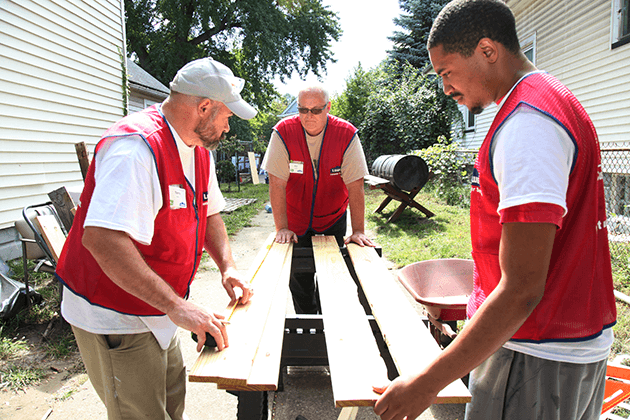 Our Lowe's Heroes employee volunteers on site, working to create safer and healthier homes for residents. 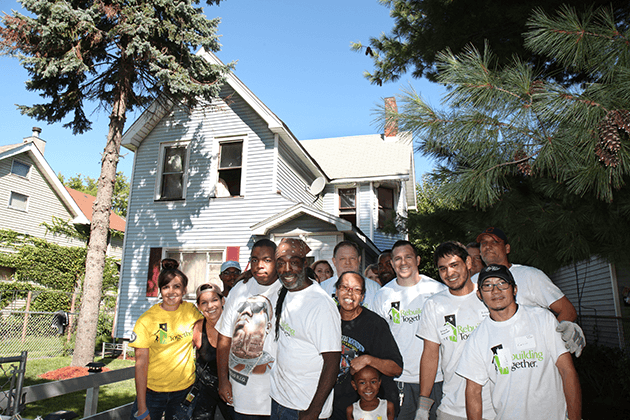 Homeowner and Slavic Village resident James with his son and volunteers at the HGTV house. 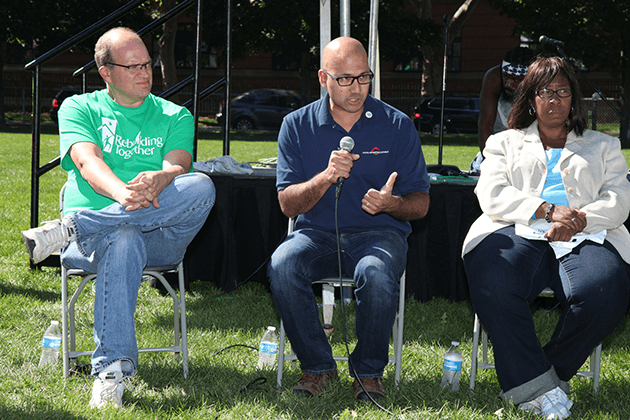 Rebuilding Together joined together with its affiliate, Rebuilding Together St. Louis, to lead its fifth annual Building a Healthy Neighborhood community revitalization project. The effort, supported by lead partner Lowe’s and 275 of its Lowe’s Heroes employee volunteers, was held in St. John, a small community in St. Louis County, October 8–10, and provided more than $760,000 in market value back to the community.

Nearly 500 community and corporate partner volunteers joined together to provide critical repairs for 14 homes and to revitalize a neighborhood community space. The majority of homeowners impacted are longtime members of the St. Louis community and range in need of support. Volunteers participated in a variety of repairs including flooring repairs and replacement, weatherization repairs, roof and handrail replacements, accessibility modifications, painting, landscaping and other major home rehabilitations.