Take a look at award recipients from our 2020 training institute

Each year Rebuilding Together honors three individuals who are making a difference for communities in need and awards three affiliates for their leadership and innovation. Take a look at this year’s recipients.

Rebuilding Together Nashville in Nashville, Tennessee received the Award for Excellence in Community Engagement. The award highlights the most creative and innovative ways Rebuilding Together affiliates partner with other agencies in their community to provide impact to the community or, more specifically, to a local neighborhood. Rebuilding Together Nashville has embraced the community revitalization partnership model and plans on focusing on specific neighborhoods at a time. They hope to mitigate some of the more harmful effects of gentrification like long-term resident displacement and the fracturing of neighborhood social networks. They met with and strategized with city-wide stakeholders to identify what target neighborhood would be the next ongoing focus of their work. They have worked with neighborhood residents, leaders and organizations to determine how to best serve the Greater Bordeaux neighborhood.

Rebuilding Together South Sound in Tacoma, Washington received the Award for Excellence in Overall Leadership. The award is presented to a Rebuilding Together affiliate who has shown outstanding growth in development, staffing solutions, administration or overall affiliate growth. Rebuilding Together South Sound tested their internal processes with an executive director sabbatical, retooled to address COVID-19 and increased a key contract and staff within the contract. Senior staff performed admirably during this time and made it clear that the affiliate would be in great hands if something happened.

Camyel Young-Calhoun of Rebuilding Together Dayton received the AmeriCorps of the Year Award. Camyel is coming to the end of her second term with Rebuilding Together Dayton as an AmeriCorps member. Camyel takes time to go the extra mile and makes sure every project is done completely. She is excellent with follow-through, and single-handedly managed “Heat the Town” last year in the absence of the Seasonal Safe At Home Director. More neighbors were served with that program under Camyel's leadership than any prior year. Since she came on board, the Dayton  community suffered the impact of 15 tornadoes, a mass shooting and of course, a pandemic. Camyel’s dedication to the affiliate during this time has been unwavering.

Jerry Liu of Rebuilding Together Montgomery County received the Volunteer of the Year Award. For nearly 25 years, Jerry has been instrumental in serving as a steadfast volunteer for Rebuilding Together Montgomery County. As such, he's done everything from coordinate construction projects for low-income homeowners and lead volunteers on project sites, to offer wise counsel and provide well-rounded perspective as a long-time Montgomery County resident. In his various roles, he has always maintained a humble and unassuming demeanor about his servicing each assignment with laser-focus on the client and people he's serving. 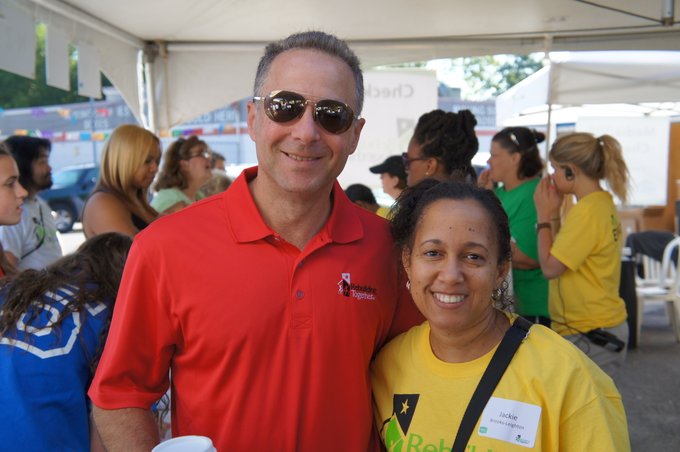 We also presented the Patty R. Johnson Award to longtime national board of directors member and former board chair Brad Segal. The Patty R. Johnson Community Builder Award, named after Rebuilding Together’s founding President and CEO, is awarded to an individual or corporation who best exemplifies dedicated leadership in service to communities in need. Brad, who is stepping off the board early next year, has helped the organization grow from an organization that worked a few times a year on a handful of homes to a year-round community revitalization that has a deep impact on the communities we serve. He was appointed to the national board in June 2009 and served as board chair from 2012 to 2015.