She Builds is a powerful collaboration between neighbors and partners who are dedicated to advancing housing and community issues affecting women.

Women-led and women-focused, She Builds, provides critical repairs for women-headed households and women-focused community spaces to empower women to maintain safe and healthy homes, make a difference in their communities and build a supportive community network.  Participants come to the builds with a myriad of experiences and skills to share and learn from each another. Programming includes participation in a home or community center renovation led by women, home repair trainings on how to maintain safe and healthy homes and leadership training and mentoring to encourage community participation and empowerment. Participants learn basic carpentry and plumbing skills, electrical safety do’s and don’ts and other on-the-job training while working on these repair projects to improve the health and safety of their own living conditions.

Today, more women are living independently and owning their own home than ever before, yet according to the National Women's Law Center, more than one in eight women and more than six in ten children live in poverty. Additionally, two-thirds of low-wage workers are women working for just $11.50 or less, most without a spouse’s income to rely on to support their family. Female-headed households with children have a much higher prevalence of repair needs and costs than other household types. She Builds addresses those needs by bringing together neighbors, volunteers, community leaders, local organizations, and corporate partners who are dedicated to advancing the housing and community issues affecting women. 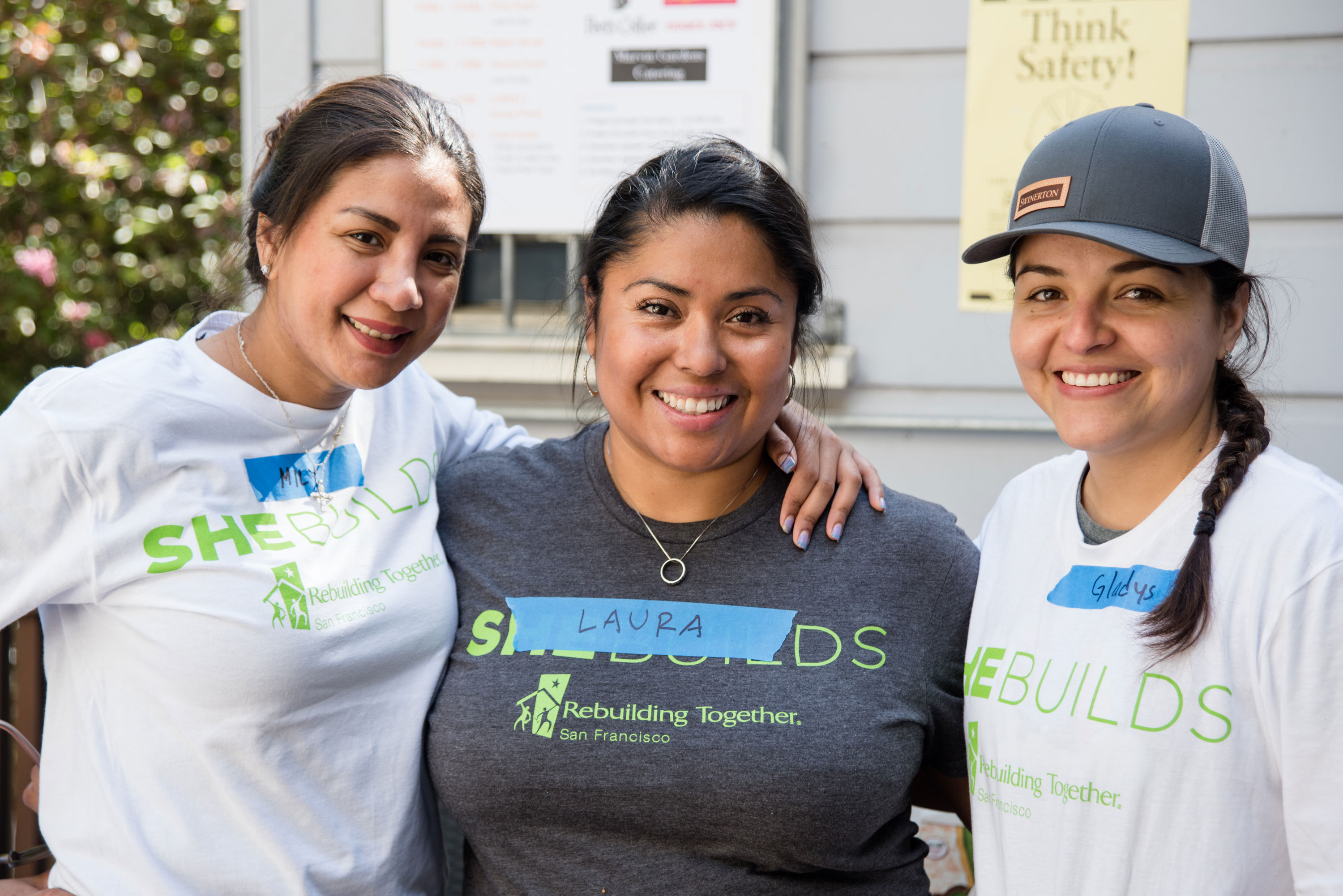 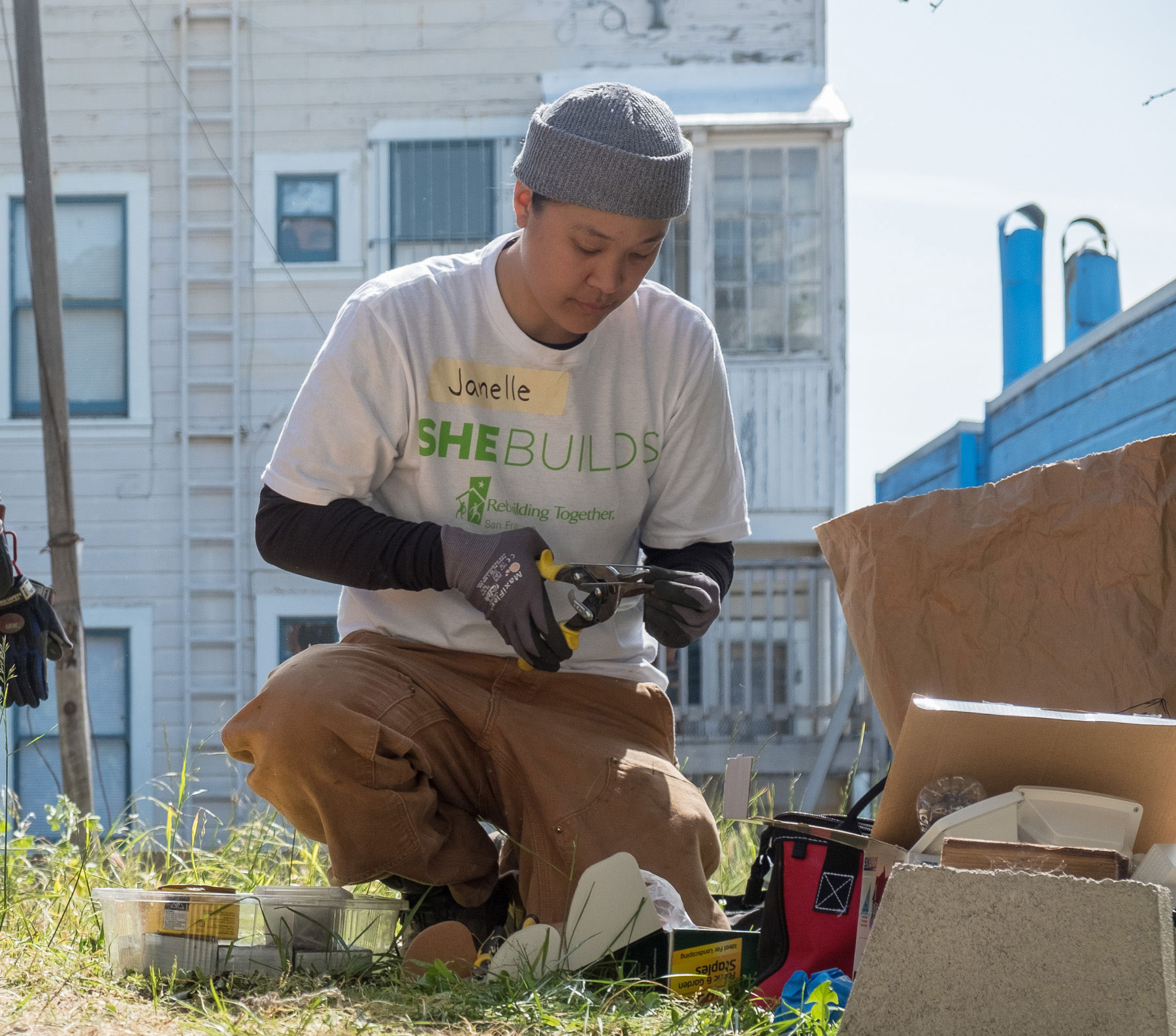 She Builds in Action - San Francisco

Since the She Builds program launched in San Francisco, Rebuilding Together San Francisco has completed work on eight nonprofit spaces and six homes, provided mentorship and employment opportunities for women, and has increased its project scope, volunteer numbers, and sponsorship amount every year. Along with repair projects and training workshops, the program matches women in skilled trades with women interested or new to skilled trades for networking and mentoring. San Francisco attributes its successes to having a committed group of passionate women on their steering committee and access to a network of professional women in the skilled trades.

In 2019, over 250 tradeswomen and female volunteer teams from the community, local businesses, and corporate sponsors came together to support the safety and longevity of two women-owned homes, a children’s center that provides mental health services for underserved youth, a shelter for survivors of domestic violence, a community garden, and a facility that supports homeless women and children. This work provided critical repairs and community support for the home and family of Charlene, a fifth generation San Franciscan who has lived in her home since 1961 and was unable to keep up with critical repairs after her father passed away.

Rebuilding Together Oklahoma City has strategically evolved their She Builds program to become a standing and well-recognized community movement. Oklahoma City has grown the program budget from $25,000 in their initial year to $100,000 in 2019. To kick off the program, this affiliate conducts skills training workshops, which include rotations among various home-repair training stations. After the completion of a series of rebuilds for women-led households, the program hosts a leadership luncheon with keynote speakers and female business leaders served as table hosts. For Oklahoma City, She Builds isn’t just about home repairs, it’s about getting women from all over the city civically engaged in their own communities.

Each fall, Rebuilding Together New York City organizes a community revitalization event with 100+ volunteers from the real estate industry to improve a nonprofit facility that supports under-resourced women and their families. The program harnesses the technical knowledge and skills of high-powered female real estate industry leaders to promote safe and healthy living conditions for women and families across New York City.

In 2019, Rebuilding Together New York City renovated the Sarah Powell Huntington House, a shelter for formerly incarcerated and women and their children managed by the Women's Prison Association. Volunteers helped with repairs and renovations that included mold abatement, upgrades to the childcare floor, repainting of rooms and hallways, upgrades to the shared outdoors space and more. Volunteers completed nearly 800 hours of volunteer service at the Sarah Powell Huntington House making a real difference in the lives of 29 women, 46 children, and the Women's Prison Association and local community. 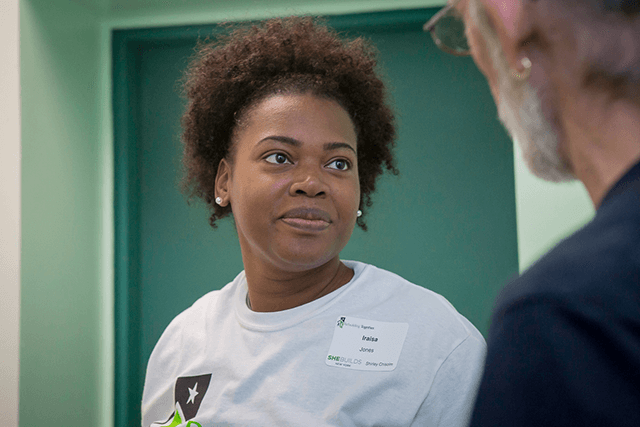